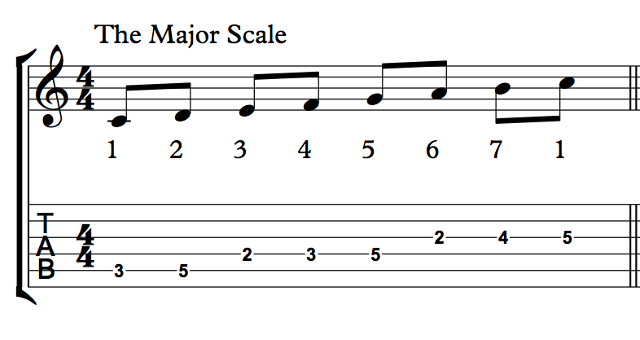 First off, I would like to thank DeftDigits.com for this great blogging opportunity. Let’s immediately jump in: scales, what are they and which one should you learn? This short article will spend more time on the latter than on the former.

In loose terms, scales are a set of pitches organized around one main note (the root), and this way or organizing notes allow us to compose, improvise, and in general play good music with nice chords. Without grouping pitches into scales, modes and chords, music would just be noise. :-)

Now, here’s a good list of the first six scales every guitarist should spend some time honing. As mentioned above, any scale can be used to improvise or write new music AND they’re also great to know from the music theory side of things. If you know your scales well, this will lead to a greater understanding of harmony, and how chords move to one another. Talk about a great way to effectively master songwriting and accompaniment! Thus, learning and practicing scales doesn’t have to be dry or boring.

Some of you will be completely new to scales and modes, a quick work of advice: don’t let the word MODE intimidate you. A mode is still just another scale. We use the term mode to imply that we’re playing a scale starting on a different note, we’re just reordering! For example, 1-2-3-4-5-6-7 becomes 3-4-5-6-7-1-2. Same 7 pitches, just ordered differently.

The Major Scale and Its Modes

This scale is the cornerstone of virtually all so-called tonal music, and will be our foundation for many of the other scales we’ll explore in this article. It is THE most important scale to learn, period.

The major scale gets divided into its modes (e.g. the modes of the major scale) simply by playing the same seven notes, but starting on another note. We do this until we have started on all of the 7 notes and climbed up. We can also say starting on another scale degree. Notice here how the C major scale is also referred to by its modal name C Ionian. Don’t worry, C major = C Ionian = C D E F G A B. No surprise there! 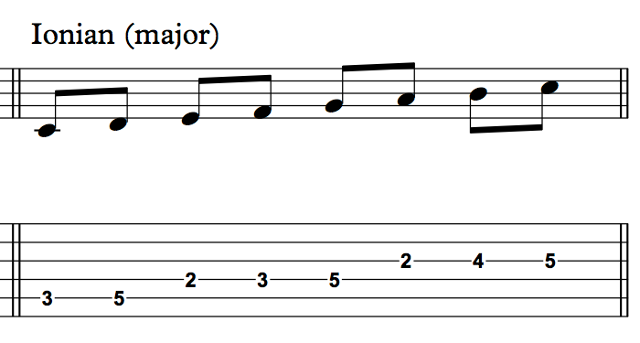 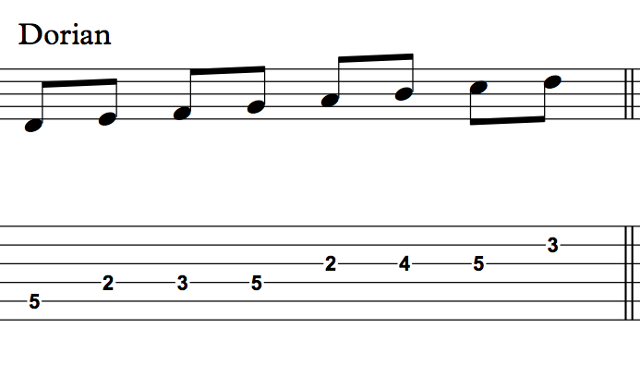 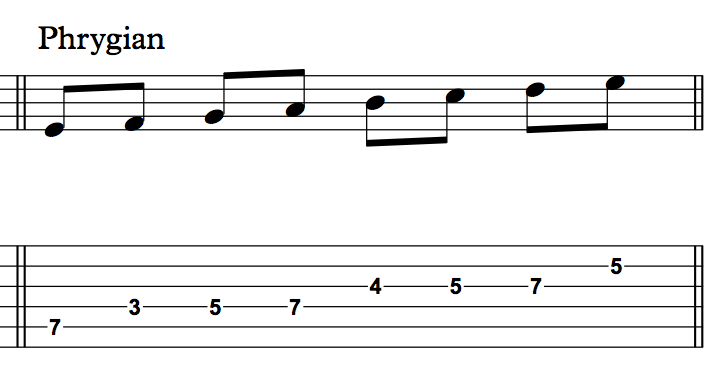 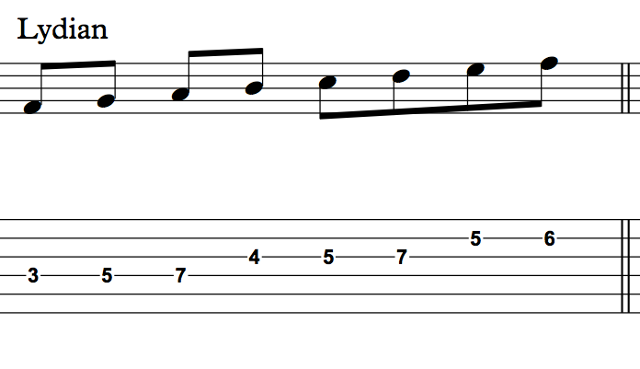 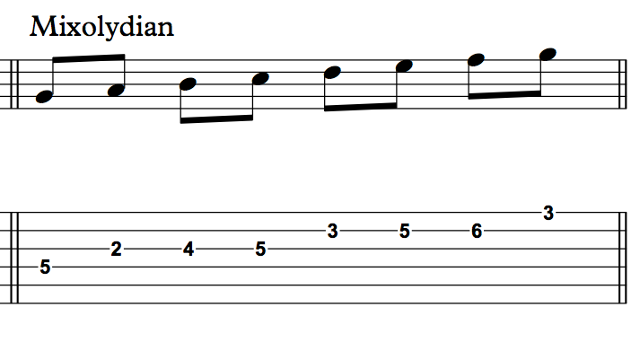 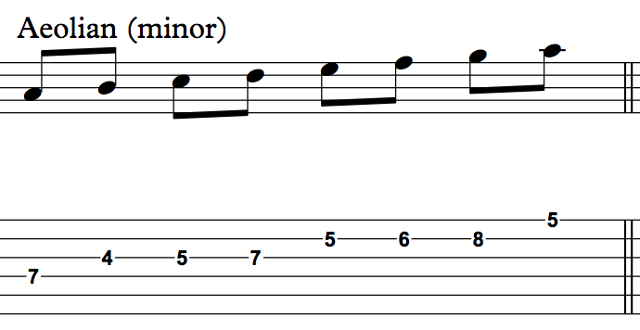 Notice that from just the major scale, we’ve already extracted 7 distinct “musical universes”. Play them and listen! Without going into too many details about harmony, modes can really add variety to your soloing because each mode depicts a different “emotion” so to speak. You should spend time practicing each mode above with a drone over the root note (I like to use an open string whenever possible). This way, you get a clearer idea of what feelings the mode bring up in you. 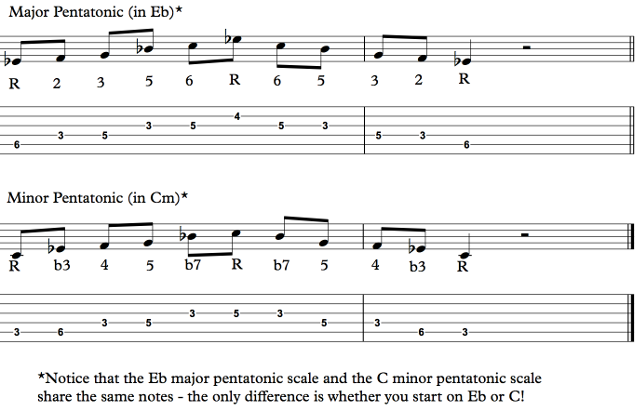 Pentatonics are super useful and, quite frankly, most guitarists start their improvisation journey right there: good ol’ blues in A, with a pentatonic “box” at the 5th fret. Don’t let the simplicity of this musical device fool you: it’s very rich and open-sounding! Oh, and yeah: penta means five. So pentatonic scales always contain only five notes.

If you’re a theory buff, you can also “reach” the major pentatonic scale by starting with the actual major scale and removing the 4th and 7th degrees.

Notice how both the major and minor pentatonics have a blue note (not in the picture), that appears in the same spot relatively. In the case of Eb major and C minor pentatonics, the “blue note” is the F# or Gb, found right in between F and G. Use this to add color, chromaticism and feeling to your solo licks.

Few guitarists realize that there are in actually three good-sounding minor scales … and we’re not talking about modes this time. We’ll, we kinda are … let’s see: what we refer to as the natural minor scale is actually the Aeolian mode. Meaning that if you want to play A natural minor, simply play A Aeolian mode. Or in other words, play the C major scale starting on its 6th degree, the A note. 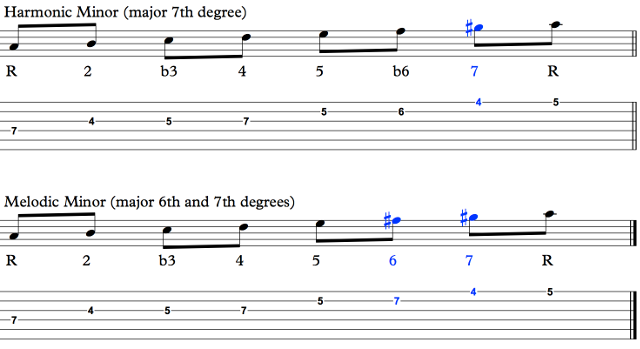 Lastly, we have the black sheep of the minor family: the melodic minor. A melodic minor is built by starting A natural minor (Aeolian) and raising both the 6th and 7th degrees to F# and G# respectively. Alternatively, you can start with A harmonic minor and raise the F to an F#. Same difference. :-)

Few people realize that melodic minor is used extensively in jazz, even on tunes that are not in a minor key. The modes of the melodic minor scale generate interesting altered dominant chords and such. Still more stuff to discuss in another article! Sorry guys.

Marc-Andre Seguin is the webmaster, “brains behind” and teacher on JazzGuitarLessons.net, the #1 online resource for learning how to play jazz guitar. He draws from his experience both as a professional jazz guitarist and professional jazz teacher to help thousands of people from all around the world learn the craft of jazz guitar.