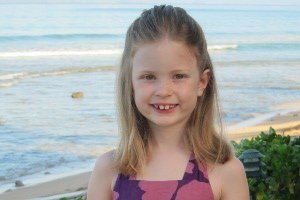 Hooray for young Caroline C, the May 2014 Student of the Month! Caroline turned seven this year, and she’s been taking guitar lessons at Deft Digits since last fall. She has exceptionally varied tastes in music: Kelly Clarkson, Elizabeth Mitchell, Simon and Garfunkel, The Who, Madonna, Charles Strouse, Tchaikovsky, Neil Diamond (can you guess her favorite?), The Dixie Chicks, Peter Gabriel, Lady Gaga, and Katy Perry. Endlessly creative, Caroline has decorated every inch of her lesson binder, and she’s just getting into writing her own songs.

In the past several months, Caroline has been steadily earning all of her open chord stickers, putting her new skills to use on songs like Frozen’s “Let it Go” and Anna Kendrick’s version of “Cups (When I’m Gone).” Her biggest current project has been preparing a bassline-and-vocal version of Katy Perry’s “Roar” for the next recital, coming up in a couple weeks. Having mastered the technical aspects of the song some time ago, Caroline has been working on adding passion and energy to her performance. It sounds better every time I hear her play it, and I’m eager to hear her let loose in front of an audience.