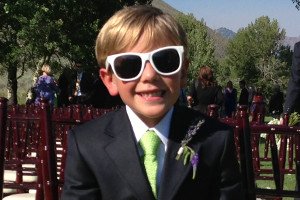 January’s Student of the Month is seven-year-old Jack Lewison, and he loves to rock. There’s never an energy shortage in the room when it’s his lesson time; he literally bounces off the walls when we don’t channel it all into the guitar.

Jack has been taking lessons on his 3/4-size electric guitar for a year and a half, and in that time he’s been a consistent practicer, cranking out classic tunes like “Satisfaction,” “Three Little Birds,” “I Walk the Line,” “Hound Dog,” and “Twist and Shout.” He’s been working hard on mastering his open chords these past several months, and he’s got that rare ability to sing and play at the same time. (I’m still trying to figure it out myself.) He’s just dipping his feet into the ocean of songwriting with a witty and radio-friendly tune called “Money in the Jar,” a musical admonishment for using certain words while the game’s on TV.

Here he is performing Elvis’s version of “Hound Dog.”