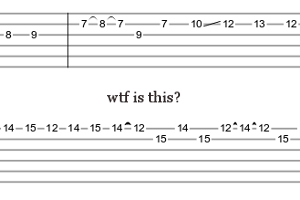 When you first lay eyes on them, guitar tabs seem about as easy to understand as quantum physics. For a beginner first picking up the instrument, learning how to read guitar tabs is an essential skill, because they’re the most common method of displaying guitar music. Thankfully, like most things, guitar tabs initially seem a lot more complicated than they really are – in fact, they’re much simpler than standard music notation. Getting to grips with guitar tabs opens the door to a whole world of music, allowing you to do everything from find out how your favorite songs are played right through to work through written guitar lessons from a wide variety of sources. Learning how to read guitar tabs is one of the most important skills to pick up as a beginner, even though you technically don’t even need a guitar to do it!

If we break guitar tabs down to the most basic form – without notes or chords to muddy the waters – we’re basically left with six horizontal lines. As you might expect, these are simply related to the six strings of your guitar. Each line is usually labeled in guitar tabs, to remove any doubt about what you’re being asked to play. Take a look at this blank guitar tab:

The important thing to remember about this when you’re learning how to read guitar tabs is that these lines aren’t related to the strings in the way you might expect. The top line (labeled “e”) isn’t the uppermost string on the instrument, but the highest pitched string – the thin E string that is closest to the ground when you’re playing. The lowest-pitched string is at the bottom of the tab; the thick E string which is closest to your head when you play. If you remember the notes for the “open” strings (use the mnemonic “Eddie Ate Dynamite, Good Bye Eddie”) then it’s easy to see which line represents which string at a glance, and if not you can just use their relative positions.

So how do you know what to play? The answer is what makes guitar tabs so easy to use. The notes you have to play are shown by numbers (not the comparatively complex musical notes system), which correspond to a fret on the relevant string. The “open” string (where nothing is fretted) is shown with a “0,” and the first fret (“1”) is the fret furthest away from the body of the instrument – right up near the headstock (which houses the “machine heads” used to tune the strings). Each subsequent fret is given a higher number, so as long as you can count to 24, you can learn how to read guitar tabs.

Try this simple exercise to get to grips with the basics of guitar tabs. It isn’t musical, but it’s enough to cement the knowledge you’ve already picked up:

You might be wondering about how you know when to play a note when you read a guitar tab, and unfortunately this is one area where traditional music notation is superior. To avoid the complexity of that approach, you simply play the notes from left to right and use the distances between them to estimate the size of the time gap between them. So you only play notes at the same time if they’re in a vertical line with each other. Chords in guitar tabs are therefore displayed like this:

Notes in vertical alignment don’t have to be part of a full chord, though, so you could also play a C major like this, picking the highest two notes together but playing the rest as an arpeggio:

The only problem with this is that the notes often aren’t perfectly-spaced (a problem particularly common with some user-submitted tabs on sites like Ultimate Guitar), so it’s often better to listen to the song you’re trying to learn to get the timing down.

You’ve now picked up the basics of how to read guitar tabs, but your journey isn’t entirely complete. As you learn new skills and techniques, different symbols will be incorporated to account for them. Some of the simplest ones are hammer-ons, pull-offs and slides (don’t worry if you don’t know what these are yet!), which are shown with symbols between the two relevant notes. For hammer-ons and pull-offs, these are “h” and “p” respectively, which may also be accompanied by a curved arc linking the two notes. For slides, an “s” or a diagonal line linking the notes is used. If the direction of your picking is important on some notes, little up or down arrows (“/\” or “\/”) may be placed below the tab to indicate which way you should pick.

The main benefit of learning how to read guitar tabs is that anyone can write them easily, but that also means there are many non-standard symbols used in different tabs. There should usually be a “key” for these symbols, so you can always check if you’re unsure of the meaning.

Learning how to read guitar tabs is very easy, but the benefits are enormous. You’ve already picked up the basics – and you can rest assured that any relevant new symbols will be introduced as you learn the accompanying techniques. If you want to test your knowledge, go check out a beginner guitar lesson and work through the tabbed exercises!

For a video version of this lesson, click here. 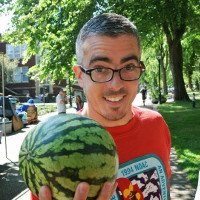