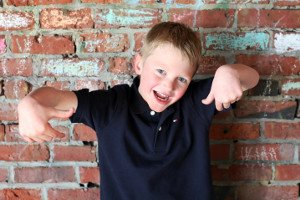 Congratulations to 7-year-old Beckett Muzia, the October 2013 Student of the Month at Deft Digits. Beckett started lessons with me a little over a year ago with his shiny red mini-Strat. He has since conquered songs by Arcade Fire, Florence and the Machine, and Bob Marley as well as a long list of standards like “Smoke on the Water,” “Seven Nation Army,” and “Louie Louie.” It’s always a fun day when I teach Beckett, because he brings a potent mixture of intense focus (watch his face in the video below) and cartoon wackiness (Despicable Me minion songs).

He might not know it yet, but Beckett is about to hit a major breakthrough. In the past few weeks, he has been on fire with his first strumming patterns. We’re going to apply them to some songs next week. Given that he already has a firm grasp of all the open chords, adding strumming patterns to his skillset will unlock a whole world of songs for him. Seasoned strummers in the audience know the jubilation he’s in for in the coming months. Cheer him on from cyberland!