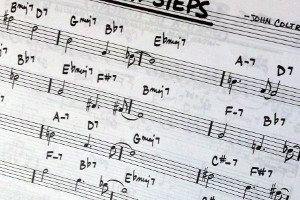 Ever been baffled by a complex chord symbol? D♯m11♭5 got you scratching your head? Fear not; your problems are about to be history! In this article, you’ll learn how to interpret just about every chord symbol you’ll ever encounter.

There are two prerequisites to this knowledge: familiarity with intervals and scale degrees. No need to master either one. If you can play, for example, a major third or a perfect fifth in several different places on your instrument, you’re good to go.

The first element of every chord name is the root note. That’s always the first thing you see. The root may contain a sharp (♯) or flat (♭). If you see D♭7, it’s a 7 chord with a D♭ root. It is not a ♭7 chord with a D root.

Chord naming relies on the concept of stacking thirds. That means adding notes from the root on up, using only major third (4 half steps) and minor third (3 half steps) intervals. For example, if your root is B, and you want to stack a bunch of minor thirds on top, you get B D F A♭, like so:

By the end of this article, you should be able to come back and name that chord.

A triad is a three-note chord created by stacking two thirds on the root. There are only four ways you can do it.

For the rest of this article, major third = M3 and minor third = m3.

Stack three thirds on top of the root, and you get a seventh chord. There are seven ways to do it.

Why no M3 M3 M3? You get an augmented triad with another root on top.

Here are some of the most common extended chords you’ll see.

In an 11 chord, the 9 is optional. In a 13 chord, the 9 and 11 are optional. These optional notes may or may not be implied. Sometimes it’s OK to include them, and sometimes they really should be omitted. It all depends on the context. If you’re studying jazz, you’ll frequently come across these issues, which are beyond the scope of this article. (Let me know if you came here looking specifically for this answer, and I can help you out. Don’t shake your monitor.)

Rule of thumb: never modify the root, the 3, or the 7 in an alteration. Such changes are accounted for in earlier parts of the chord symbol (the root note, major or minor, the type of 7th chord) before you get to the alterations. The rest of the notes, 5 9 11 13, are all fair game for sharping and flatting. That allows for many possible combinations, so I’ll limit the next table to a few common examples which will give you a good idea.

(We’ve exhausted our stacked thirds model, so the rest of the tables below won’t show them. We’re dealing only with tweaks to that system from now on.)

Suspended chords modify the 3 in a chord, moving it either down to the 2 or up to the 4. If the 3 is still present along with the 2 or 4, then they should be treated as 9 or 11 instead.