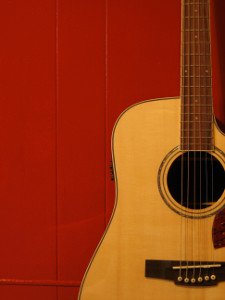 Intervals are a great way to get started in music theory. They describe the distance between any two notes, and they allow you to think and communicate about music in a more sensible manner.

Scale degrees, while often not distinguished from intervals, are in fact a little bit different. They refer to the notes in a scale, relative to the root. As you’ll see in this article, scale degrees can be seen as a type of interval, specifically from the root ascending to any other note, in the scale or not. There is also a subtle difference in language, which I’m sure some find pedantic, but I find quite handy. If I succeed in portraying it clearly, maybe you will too.

Let’s start with an example, using the C major scale. Make sure you know a little about intervals first. See Intervals on the Guitar: The Key to Fretboard Music Theory.

In the C major scale, we know that the interval from C up to E is a major third, from D up to A is a perfect fifth, and so on. Scale degrees, on the other hand, label every note relative to the root, C.

Notice that there are no “major/minor/perfect” qualifications from interval land. Here’s that subtle difference in language. C up to B will always be a major seventh interval, but when C is the root, B is just “the 7.”

We can alter these scale degrees too. Since we aren’t using “major/minor/perfect,” we won’t use “diminished/augmented” either. We’ll use flats and sharps. Let’s shift our perspective with a new root in this example. Assuming G is the root, here’s how all the other notes pan out using scale degrees:

Those unaltered notes (1 2 3 4 5 6 7) always refer to the major scale of the current root note (in this case G A B C D E F♯). Anything outside that major scale is described with a sharp or flat alteration.

Now we can define any scale, arpeggio, chord, or even a melody, with scale degrees. That universalizes the thing we’re defining so that it’s independent of root; you can transpose it to work on any root note. More examples!

Looking at all of the examples so far, I’ve named the notes first, then revealed the scale degrees. But we can define all of these things independent of root. The minor scale, for example, is defined as 1 2 ♭3 4 5 ♭6 ♭7. That’s how you can construct the scale from any root! Here are all the definitions we’ve seen so far, plus a few more:

No need to memorize any of these just yet, except for the major scale. That is your yardstick. It’s the only one with all seven unaltered scale degrees: 1 2 3 4 5 6 7. Everything else is defined by how it’s different from that yardstick. For more on getting to know that yardstick inside and out, see The Easiest Intro to Music Theory.