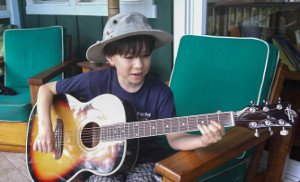 Exciting announcement! Starting this month, June 2013, I’ll be featuring a profile on one Deft Digits student as “Student of the Month.” The very first one is nine-year-old Lucca Burgess. Lucca and his Dad, Nat, have been taking guitar lessons together at Deft Digits since December 2011. They’ve learned at least a dozen Beatles tunes together, and they’re a joy to connect with musically week after week. Lucca’s also really into pop music (One Direction, Jessie J, Justin Bieber, Five for Fighting) and classic rock (The Who, Cat Stevens).

I interviewed Lucca during his last lesson about the joys of learning music. You’ll even get to hear a bit of the Five for Fighting song he just started working on, called “Superman.”

Lucca has an incredible knack for expressing the emotions of the music he’s performing, and he does a great job of connecting with an audience and making his listeners feel what he’s feeling. Check out his performance of Jason Mraz’s “I’m Yours” from his school talent show last month.

Stay up to date with Lucca’s musical adventures at his YouTube channel!