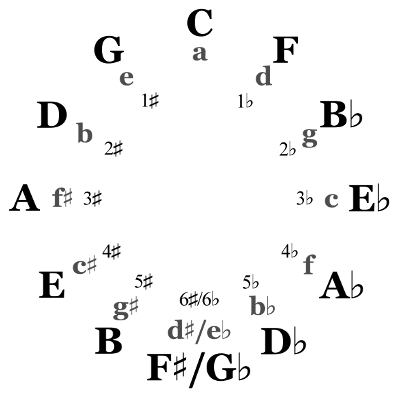 The Cycle of Fourths (a.k.a. “Circle of Fifths” or “Cycle of Fifths” or “Circle of Fourths”) is a representation of all 12 notes in the chromatic scale, arranged into a circle. It’s most commonly used to easily find the notes in any major or minor key, but it can also give the student a solid intuition of chord progressions. On top of that, it’s a great exercise tool for learning scales and other concepts in all 12 keys (as I’ll demonstrate in Part 3 of The Mother of All Major Scale Exercises).

Constructing the Cycle of Fourths

The easiest way to create a cycle of notes is chromatically: half step by half step, fret by fret. (The interval between any note and the note one fret higher is known as a half step.) Visualizing on the guitar, you can start with an open E string, naming the notes on every fret:

The pattern you’ve created will repeat after that final E, as many times as you’re willing to write it out. But it’s easier to put those notes in a circle and follow the steps clockwise. 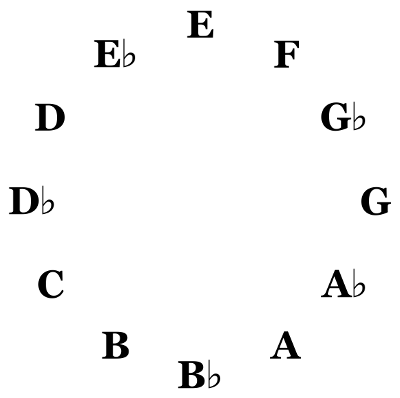 There is another way to construct a cycle of all 12 notes. Instead of moving up one fret with each step, move up five. (If you know your math, you’ll see that cycles with two frets, three frets, or four frets between adjacent notes will repeat before they get to all 12 notes.) This interval, a distance of five frets between notes, is known as a perfect fourth (there are other types of fourths), or a fourth for short. The name comes from the major scale. If you start playing a major scale with the lower note in your fourth interval as the root, the fourth note in that scale will be five frets up. Take the first few notes of an E major scale, starting on your low E string:

The fourth note is five frets higher than the root. The interval from E to A is a fourth.

Let’s arrange it in a circle again, this time rotated so that C is at the top. (Music theory tends to revolve around C, since the C major scale contains no sharps or flats.) Ladies and gentlemen, this is the Cycle of Fourths! 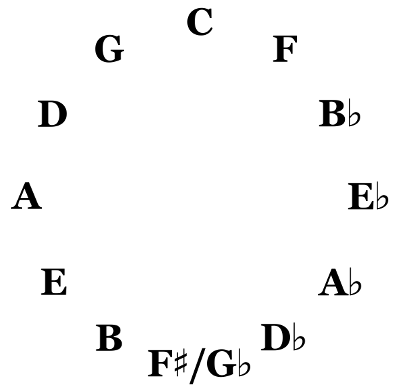 The Circle of Fifths

You can construct another cycle with the perfect fifth interval. This interval is seven frets, the distance between the root and the fifth note of a major scale. 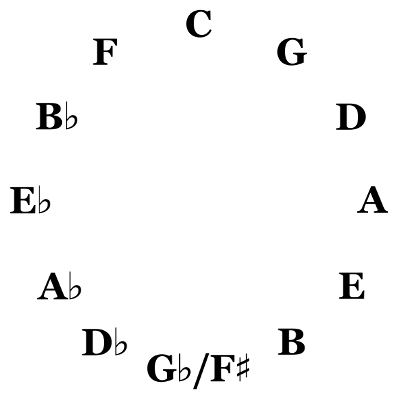 And that was the Circle of Fifths. Notice that this is simply going counterclockwise around the Cycle of Fourths. Whether you call it a “circle” or a “cycle,” whether you use fourths or fifths, you will get the same collection of notes. Whichever mirrored version you choose, moving one way will be fourths and the other way, fifths.

I Prefer “Cycle of Fourths”

The most common name for this concept is “Circle of Fifths.” And it’s most common to see that wheel of notes arranged with ascending fifths going clockwise: C, G, D, A, etc. However, I prefer “Cycle of Fourths” for a few reasons.

Chord progressions tend to move in ascending fourths (descending fifths), more often than any other interval. Try a simple chord progression in the key of G: G C G D. Repeat it a few times. All three of these chord roots are right next to each other on the cycle. The strongest motion between any of these chords, the biggest demand for resolution, is from D to G. That direction is clockwise on the Cycle of Fourths.

This motion of chord roots in fourths happens most often in jazz and classical music. For example, the first few chords in Charlie Parker’s “Confirmation” are F6 Em7b5 A7 Dm7 G7 Cm7 F7 Bb7. Take a look at the chord roots. From E to Bb, they move strictly in fourths. This kind of chord root motion, usually not this long, is more common in jazz than the electric guitar is in rock.

Have a few more examples from the rock realm. See if you can spot the chords’ root movement along the Cycle of Fourths.

EDIT: Regarding “Circle” vs. “Cycle,” the latter implies the motion seen in all these chord progressions, while the former seems more like a static geometric tool. I’m not the only one using this term. 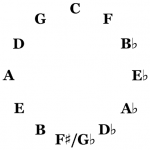 If you know some of your major scales, you might have noticed something peculiar about the Cycle of Fourths. They’re all clumped together. C major is the easiest to see; it contains C D E F G A B, no sharps or flats. Look at the cycle. There they are, all in a row, jumbled into a funny order, but all together. Now, if we look at F major, that contains F G A Bb C D E. The B changed to Bb, and now the F major scale is all together too. Look at G major: G A B C D E F#. All together! This will work with all 12 major scales. Find the root on the cycle, add one note clockwise and five notes in the other direction, and you’ve got a major scale.

This works just as well with minor scales. A minor contains A B C D E F G. E minor contains E F# G A B C D. Take any root on the cycle, add four notes clockwise and two notes counterclockwise, and you’ve got a minor scale.

(If you’re crazy, you might dig my method for visualizing all kinds of scales on the Cycle of Fourths.) 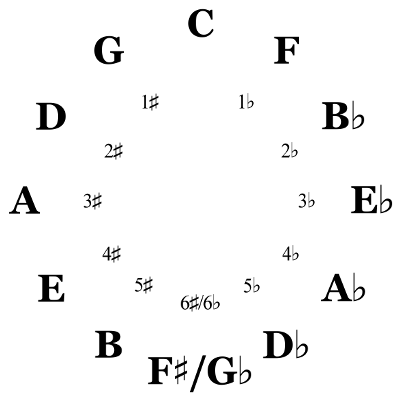 We can do the same thing with minor keys, only now we situate A at the top, because that’s the only minor key with no sharps or flats.

These can be combined into a single diagram, with the minor cycle spun 90 degrees to match key signatures with the major cycle.

How to Memorize the Cycle of Fourths

The best way to memorize the cycle is to think of it as a clock. C lines up with 12 o’clock, F with 1 o’clock, Bb with 2 o’clock, and so on. (True story: I own a Cycle of Fourths Watch.) Ignore the minor version for now; you can bring it in later. Note your landmarks at 12, 3, 6, and 9: C is at the top, Eb is directly to the right, F#/Gb is at the bottom, and A is directly to the left. Get those down first. The remaining two notes between each of those are best memorized by reciting the cycle to yourself and getting used to the sequence.

Looking at only the seven natural notes in the cycle, you get a word and an acronym: BEAD, GCF. I remember GCF as “Greatest Common Factor” from grade school math. That has no relevance here; it was just a very familiar collection of letters. You might not have that same connection, but it helped me learn the cycle in my early musical days. As you move beyond F into the flats, they follow the same initial pattern before falling back on B: Bb Eb Ab Db Gb. In your spare time, recite the entire cycle to yourself a few times. Use a diagram when you need it. Getting that sequence rolling off your tongue will help you fill in the blanks around the four landmarks.

Yes, this is boring rote memorization, but we’ve all done this kind of thing before. There are only 12 bits of information to remember and assemble, and the benefits are huge. Here’s a printable PDF to post on your wall until it’s set permanently in your brain: 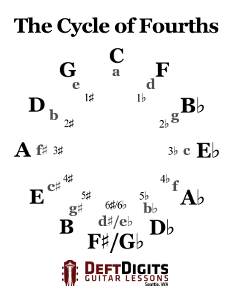 Once you can navigate your way around the clock-shaped cycle in your head with ease, you can start adding supplementary information like the key signature and the relative minor key of each major key. Your new verbal workout will sound like this:

When you get tired of going around and around clockwise (don’t be fooled; you will get tired of it), you can try going counterclockwise or pinging around the cycle in other ways (i.e. 1 flat, 1 sharp, 2 sharps, 2 flats, 3 flats, 3 sharps, etc.).

How to Use the Cycle of Fourths

The most obvious benefit of knowing the Cycle of Fourths is that you’ll be able to instantly translate between major key, key signature, and relative minor key. You’ll also be able to recognize familiar bits of chord progressions when the roots move in fourths. If you haven’t memorized every note on the guitar yet, this will help you do it, because, tuning trap notwithstanding, moving one string higher on the same fret as any given note equates to moving one step forward on the cycle. And one string lower equates to one step backwards on the cycle.

Another way to use the cycle is in any kind of exercise that you need to practice in all 12 keys. Suppose you’re working on the old faithful minor pentatonic box, and you want to move that shape around and spend some time on each of the 12 possible roots. You could move it chromatically, one fret at a time, but that’s a very predictable pattern. Each time you move, the new position is barely different from the previous. If you move based on the Cycle of Fourths, the jump between each step provides some welcome variety. If you start with A minor pentatonic at the fifth fret, you’ll move to D minor pentatonic at the tenth fret, then G at the third, C at the eighth, etc.

Furthermore, if you know your CAGED shapes of the major scale, you can cycle through all five of those positions without moving around so much, simply by moving the roots through the Cycle of Fourths. More on that in Part 3 of “The Mother of All Major Scale Exercises.”