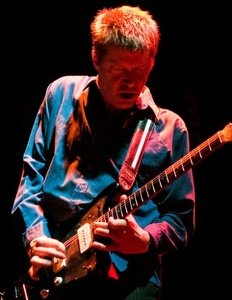 This is the tenth installment of the Discover a Guitarist series.

How I Discovered Nels Cline

I can’t remember how I first heard of Nels Cline (b. 1956). It was probably around 2004, when I played in the jazz band at Pomona College, directed by Bobby Bradford. I recall thinking it was cool that Bobby had recently collaborated with Nels. This was around the time that Nels joined the band Wilco, and subsequently made the cover of Guitar Player magazine. I brought my copy into rehearsal one day to show Bobby and talk about how I was digging the little bit of Nels’s music I’d started listening to.

But I didn’t really discover Nels Cline until a few years later. I wrote about it on my other guitar blog, From the Woodshed:

I remember the moment that sparked my interest. I was on my way home from a late band practice, dead tired, ready for bed, listening to Henry Rollins’s radio show on L.A.’s Indie 103.1. He plays whatever he wants on his show, and it’s all over the map. On this particular evening, he chose to play “Jupiter” from John Coltrane’s Interstellar Space. I had heard plenty of Coltrane, but none of his late-period stuff, and Interstellar Space is about as late-period as it gets. The album is a collection of duets with drummer Rashied Ali, and they go totally nuts. Not only is the playing technically mind-blowing, but this was the first free jazz that made me feel like there’s some underlying structure that’s totally beyond my comprehension. Hearing it for the first time was an unreal experience. I was lucky to arrive at home as the song started; I could sit in my parked car with my jaw on the floor instead of crashing on the freeway.

When the song finished, I ran inside to look up more info on this album. I spent an hour reading about it and Coltrane’s other later works. Then I found a live recording of Nels Cline and drummer Gregg Bendian performing the album in its entirety. (Listen here. Watch an excerpt here.) I was immediately captivated beyond belief. If the Coltrane track I’d just heard was like seeing daylight after a lifetime underground, then this was like a rocket to the next galaxy.

Nels has been involved in probably hundreds of different projects in his lengthy career. My favorite is his band with Scott Amendola on drums and Devin Hoff on bass, The Nels Cline Singers. Here’s a clip of the group playing “Square King” in 2005:

If there’s one genre that Nels might call his home base, it’s jazz. As you can hear in that video, he strays from it quite a bit. He has worked in so many different contexts that it’s hard to convey anything about him in words. I could post dozens of videos and recordings, but I’ll let you go looking if the above catches your ear. Nels has a scary intensity that seems to run through all his work, even though most of it isn’t as loud and in-your-face as “Square King.”

Read more about Nels Cline at his website or his Wikipedia page.

Nels Cline’s Impact on My Life

The biggest effect Nels Cline’s music has had on my life is the way it changed how I listen. Nels has said in many interviews that he pursues sound in all his various projects, whether one calls it music or not. He has a fascination with sound (weird sounds, scary sounds, angelic sounds, anything), and listening to his music has helped me cultivate my own fascination with sound. A few of his latest albums have been released on the Cryptogramophone label, so I discovered more and more edgy modern jazz artists from listening to their catalog.

I can now go back to free jazz players like Ornette Coleman and have a better idea of what they’re doing. And I can execute free jazz pieces like Bobby Bradford’s “A Little Pain” or my own “Wacky Misadventure” with some confidence. When your focus is on sound, music becomes less of a hurdle, both in listening and in playing. You can hear beauty from all kinds of sources that you may not have otherwise considered musical.