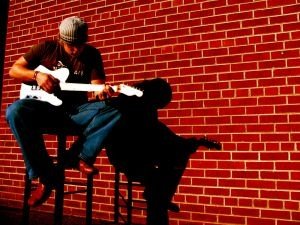 You know what you ought to practice. Maybe you have a short list or a long list. My list would last me several lifetimes if I had them. But do you love practicing what you “ought” to practice? Or does it make you think twice about sitting down with the guitar?

If you’re not excited about what you think you should be practicing, then I think you should blow it off. At least for now, just forget about it. Go grab your guitar and play. Play something you love, an old song that’s always been your favorite, or a tune you just heard on the radio, whatever gets you playing.

There’s nothing wrong with relaxing and playing what you love instead of forcing yourself to practice something new. In fact, it’s far more important to play than to practice.

I recall when I learned the riff on Steve Ray Vaughan’s “Pride and Joy” when I was a kid, I couldn’t stop playing it. Even after I had it up to speed with most of the mistakes worked out, I spent less time practicing new songs and just played this riff over and over for months. My family recalls this too.

I actually think I became a better player because of that. Not only did it reinforce my love for the instrument, it embedded that riff so firmly in my fingers’ muscle memory that I’ll never be unable to play it. That groove got into my soul in a way that would not have happened had I instead moved to the next song on my list and practiced a bunch of scales or something.

So while there are times when practicing will help you improve faster, don’t forget the whole point behind it; to enjoy playing the guitar. If the thought of practicing doesn’t get the guitar in your lap, just play. And if that doesn’t excite you, learn something easy. Every new song you learn will help you, even if you find it as easy as walking. Try Heartwood Guitar’s chord charts.