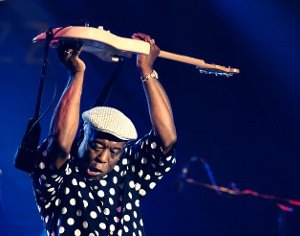 This sixth installment of the Discover a Guitarist series is a guest post from Donnie Schexnayder of Start Teaching Guitar.

One of my all-time favorite blues guitar players is the legendary Buddy Guy. He started out playing in Chicago during the late 1950s, and he was heavily influenced by the great blues artists of that time, including Muddy Waters. Buddy was one of the pioneers of the “Chicago blues” sound, and a really flamboyant showman. He influenced a multitude of guitar players who would follow in his footsteps, including Eric Clapton, Jeff Beck, Jimmy Page, Jimi Hendrix and Stevie Ray Vaughan.

Buddy isn’t your typical blues guitar player, like B.B. King or John Lee Hooker. This guy plays with reckless abandon and FURY. He does crazy stuff on the guitar and all it takes is a little bit of listening to see the imprint he’s made on rock guitar as we know it today. I would even go as far as saying that without Buddy Guy, there would BE no rock guitar. Seriously, his influence is THAT dramatic.

How I Discovered Buddy Guy

I first heard about Buddy back in 1990 when I was reading an old issue of Guitar Player magazine. Everybody seemed to be singing the praises of Buddy Guy; Stevie Ray Vaughn talked about him all the time, and Eric Clapton described him as “the best guitar player alive.” I read about how Jimi Hendrix used to sit there wide-eyed at a front table when Buddy would play and how he would have a tape recorder on his lap, recording everything. Picking guitar notes with his teeth, playing behind his neck and all the other flamboyant stage antics associated with Jimi Hendrix were all inspired by Buddy Guy. That got me wanting to know more, so I ran out and picked up his latest CD at the time, which was Damn Right, I’ve Got the Blues. From that point on, I was hooked!

One thing I have in common with Buddy Guy is that we were both born and raised in Louisiana. That’s a great segue into an interesting story. I’m originally from the Lafayette, LA area and every year there’s a cool outdoor music festival called Festival International. My friends and I looked forward to this event every year because interesting artists from all over the world would come and do outdoor performances. Back in 1990, I heard that Buddy Guy would be playing on the main stage, so we went down to check it out. We were right in front of the stage, and it started to rain, but Buddy and his band kept right on playing. He completely blew me away and gave one of the most incredible performances I’ve seen by ANY guitar player EVER. I honestly think the course of my life changed that night and the guitar became a much bigger part of my world. To cap things off, John Mayall (of John Mayall & the Bluesbreakers) came out and did some encore performances with Buddy and his band. It was a night I will never forget.

What Buddy Taught Me

I didn’t start playing guitar until 1988, when I was 18 years old. I was more interested in hard rock playing than anything else, and I didn’t have very much respect for blues at the time… until I saw Buddy Guy perform that night in 1990. From then on, I bought every blues CD I could get my hands on and started learning every lick and song I could. Blues guitar became a serious passion for me after that, and I have Buddy Guy to thank for it.

I’ve also tried to take his crazy approach to soloing and performing and apply it to my own playing. I learned that it’s not about playing everything perfectly and trying to sound just like the original recording of a song. Instead, what makes TRUE MUSIC and ART is to let that fire in your belly flow out through your fingers, through your guitar and out into the world. It’s the PASSION you pour into your guitar playing that touches people and reaches the level of their souls, and the best guitar players are the people who know how to make that “body/soul” connection when they perform live. Buddy Guy was the guitar player who helped me feel that for the first time, and that’s a cool experience I’m proud to share with Clapton, Hendrix, Stevie Ray and a multitude of other players I will probably never meet.

Buddy’s still alive and kicking. He’s 74 now, but he still tours and you can check out one of his shows in a city near you. He’s won six Grammy awards over the years and was inducted into the Rock and Roll Hall of Fame in 2005. He’s the best, most influential guitar player most people have never heard of. Here’s a great example of Buddy’s live playing from the Montreaux Jazz Festival in 1992:

Are you a new or long-time Buddy Guy fan? Let’s talk about it in the comments below. I’d love to hear about how his playing has influenced you!

Donnie Schexnayder is a musician, guitar teacher and small business coach. He produces the Start Teaching Guitar podcast and loves to help guitar players become guitar teachers and successful business owners so they can do music full-time and escape their day jobs. Check out his website at StartTeachingGuitar.com for more info.