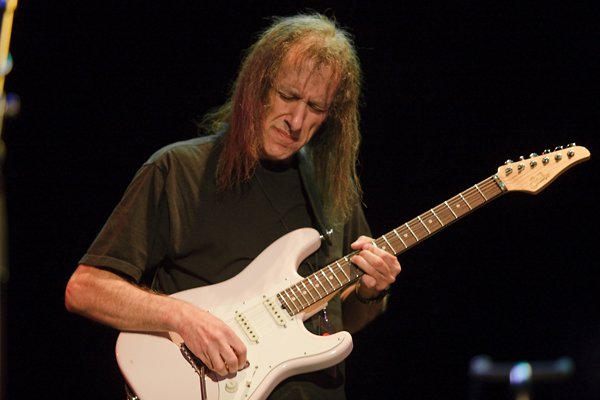 This second installment of the Discover a Guitarist series is a guest post from JP Holesworth of the Stratoblogster Guitar Blog.

How I Discovered Scott Henderson 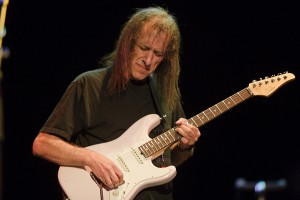 I discovered Scott Henderson in the mid-1980s on bassist Jeff Berlin’s Players and Champion albums. This was the same period when Eric Johnson, Stevie Ray Vaughan, Steve Vai and Joe Satriani were just exploding on the scene. What struck me about Henderson was his knack for naturally fusing different genres, styles and techniques. He displayed an ability to step out of the box more broadly than the aforementioned guitarists without sounding academic or clinical. I’m not into perfect, soulless musicians, OK? Also understand that a fusion guitar player isn’t necessarily someone who strives to imitate John McLaughlin, commonly referred to as the father of fusion guitar. Rather, a fusion guitar player can morph genres together in his own way, and have it make sense.

At the time, also being familiar with guitarists Steve Morse and Allan Holdsworth, as well as being a big Jeff Beck fan, I had developed an eclectic ear. So I was ready and able to appreciate Henderson’s playing vocabulary.

This video is instructional, but very loose and interesting, with some bonuses for trem users and Strat players:

An MI/GIT alum (and now an instructor there), Scott cut his teeth in some major fusion/progressive gigs besides Jeff Berlin’s projects, including Jean Luc Ponty, Chick Corea and Joe Zawinul. These names represent the first wave of Jazz artists to go electric and get loud, led by Miles Davis, whose inspiration for this shift was none other than Jimi Hendrix.

Henderson formed the fusion band Tribal Tech in the late ’80s, producing several albums throughout the ’90s. He has been voted Best Jazz Guitarist in the Guitar Player polls. But also by the mid-’90s, Scott began recording some very bluesy solo albums quite different sounding from Tribal Tech. He currently tours internationally, and teaches at MI when not touring.

“Tore Down House”: Title track from Scott’s 2nd solo album, featuring Thelma Houston on vocals. This tune is an encylopedia of Strat tones.

“Three Nighter” with Jeff Berlin: From the album Crossroads.

Henderson’s Impact on My Life

For me, Scott Henderson’s playing bridges SRV to Jeff Beck to Allan Holdsworth. His music can provide a gateway for expanding one’s tastes, or even helping you get what Holdsworth or a bebop sax player is doing. But his sound maintains some dirt and garage grease under the nails, and a bloody knuckle or two in the tone.

Already a fan? Leave a comment below and tell us how you discovered Henderson’s playing and what it’s done to you.