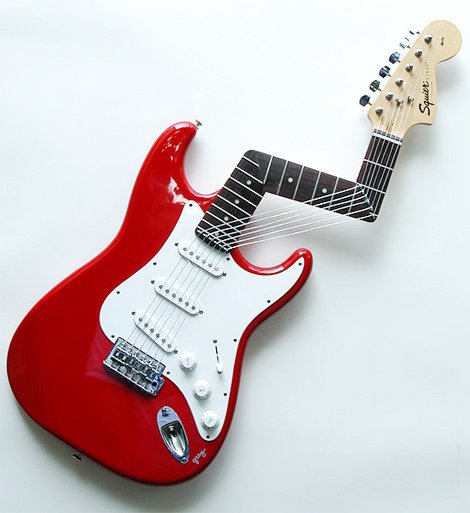 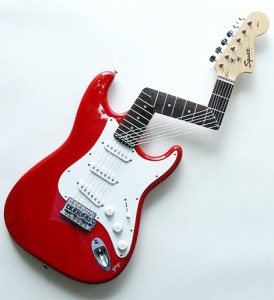 One of the keys to unlocking the guitar fretboard is being able to play the same thing in different places. A great way to get started on this path is learning how to find every major and minor chord everywhere on the guitar. Don’t worry; it’s easier than it sounds. I’ll show you some patterns and tricks that will make switching chord voicings feel like second nature.

The first thing to keep in mind is that every major chord or minor chord requires only three notes. (These basic major and minor chords are also called triads.) If you’ve never looked closely at the chords you’re used to playing, this might be confusing at first. Take a look at any of the 8 basic open chords, and you’ll find four to six notes in each of them. However, many of those notes are doubled, played at different octaves on different strings. The notes in an open E major chord are, low to high, E B E G# B E. The only notes you need to construct an E major chord are E, G#, and B. Throw them into any configuration with all the duplicates you want, it’s still an E major chord. (Leaving any of those notes out may or may not sound like E major, depending on the context. Technically, you need all three to complete the triad.)

Let’s start this little study with C major. You’ll need the notes C, E, G, and nothing else. Take a look at the layout of those three notes all over the guitar neck:

Since C is the root of this chord, let’s look at some of the patterns in this diagram as they relate to C. If you’ve spent some time learning every note on the fretboard, you’ll be able to find all the Cs right quick. Use them as your anchors. Now, how can you find the other two notes from any given C? Adjusting for the tuning difference between the G and B strings, notice that there’s always a G one string lower on the same fret as any C. And there’s always an E one string higher and one fret lower. How many more can you find? Write down as many of these relationships as you can.

The easiest way to play a major chord is with three different notes on three adjacent strings. Continuing with C major, there are three ways to arrange its notes to land on adjacent strings: C E G, E G C, and G C E. There are four such string groups: 123, 234, 345, and 456. That’s a mere twelve shapes to memorize, and most of them are featured in the larger open chords you already know.

For the C major triad, all of these grips can be summed up in a bit of tablature. (The lowest voicing in each string group is repeated an octave higher for good measure.)

Don’t play any of these without knowing which note is the root, C in this case. I left no indication of it on purpose. The more you figure it out on your own, the better it will stick.

As you practice this, you can rely more on knowing the shapes rather than finding every individual note. Try switching to G major, moving all of the above voicings to new locations, anchored on G as the new root.

For reference, here are all twelve major triads:

Minor chords work the same way as the majors, just with a different set of three notes for each one. Let’s start with Am: A C E. Make a fretboard diagram like the one for C major above. Fill out all the A, C, and E notes, and write down any patterns you see relative to the new root, A.

Once you’ve found all the notes, play through the three-note voicings below, identifying the root in each one.

Once you know these, try moving the whole system to E minor. Always know where the root is.

Below are the rest of the minor triads, for reference. (Memorizing all of these is another great exercise. Try out my Triad Trainer.)

To complete this training, your task is simply to repeat the above exercises with all 12 major chords and all 12 minor chords. It’s only tough on your brain the first time. After that, everything repeats from a different perspective.

Once you have a handle on these shapes, start combining them into bigger ones. You’ve probably noticed some overlap between them. Exploit this to create 4-, 5-, and 6-string shapes. (All will require doubled notes.) You’ll end up with many of the exact shapes you use for open chords. If you’re feeling adventurous, try skipping strings, moving all the notes around, adding new notes. Explore!