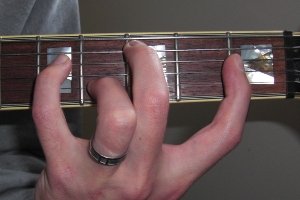 Note: Since writing this article, I’ve created an entire course on the subject: Know Every Note.

Knowing every note on the guitar is a challenge unique to the instrument. A saxophone has only one way to finger each note, while a guitar usually has a few different strings and four fingers to choose from. String a few notes together and the permutations of how to play them will wreck your brain. Pianists have a similar problem with ten available digits, but you can memorize the notes on a keyboard in a matter of minutes; the same pattern of white and black keys repeats every octave.

The challenge with navigating the guitar fretboard is its two-dimensional layout. It’s a matrix, while nearly every other instrument has a linear path of notes from the bottom to the top of its range. But this challenge hasn’t halted anyone’s progress through generations of great guitar players, and it needn’t halt yours. In fact, you can use the guitar’s layout to your advantage. Pattern visualization comes much easier on guitar than any other instrument, and we can use it for memorizing the notes on the fretboard.

Why Know the Whole Fretboard?

If you don’t know every single note on the guitar cold, without hesitation, then I highly recommend taking a little time to get that under your belt. It will enhance everything else you do with the instrument. Depending on your experience, you might be able to skip some of the first few days below.

The primary advantage to knowing every note on the fretboard is in creation. You can build your own chords and scales anywhere on the neck instead of memorizing all the shapes. You can improvise in any position you want instead of getting stuck in one spot. Knowing every note is the key to getting around the whole fretboard effortlessly.

If you haven’t started playing yet, come back to this after you’ve learned some music. That’s way more fun than memorizing notes. (I teach lessons.)

From low to high (in pitch), thickest to thinnest, ceiling to floor:
E A D G B E

Know your open strings like you know your alphabet. Pause your playing every couple minutes to point at each string and name it out loud. Don’t worry if you have to think about it. That won’t last. Just keep naming the strings out loud until it’s automatic.

The C major scale is the only major scale without any sharps or flats. We’ll stick with it through most of this process:
C D E F G A B C

Straying from C major for a moment, a whole step is a distance of two frets; a half step, one fret. To construct any major scale on a single string, start with any note and ascend with the following blueprint:
Whole Whole Half Whole Whole Whole Half

Applying the whole/half pattern between each note, you’ll find half steps between E and F, and between B and C. Those are the only half steps. 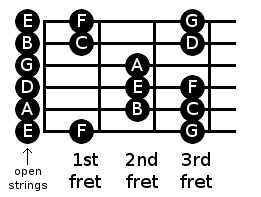 Today you get to play a little bit. You might know the scale diagram above already. It’s the C major scale contained in the first three frets. Starting down on the low open E string, play each note and say its name out loud. Even if you’ve already memorized this scale shape, don’t skip this step until you can play the scale up and down, over and over, saying every note out loud without thinking.

If you’ve ever played a barre or power chord, then you’ve dealt with the notes on the sixth string. This is the easiest and most useful string to memorize, so make sure you’ve got it down for good before proceeding. Also notice that you’re memorizing the first string at the same time; every fret has the same note on the first and sixth strings, two octaves apart.

Plucking more low-hanging fruit, the fifth string is handy for the same reasons as the sixth. Barre and power chords are frequently rooted on this string as well.

Today we’ll look at a few patterns for finding the same note in different places. First review how you tune your guitar: 5th fret on strings 6, 5, 4, 2, and 4th fret on string 3. Each of those gets you the same note as the next open string. That pattern holds throughout the fretboard, so you can always go up or down four or five frets, depending on your location, to get the same note on an adjacent string.

Now let’s look at finding octaves. From the sixth and fifth strings, the formula is identical: two frets up, two strings up.

From the fourth and third strings, you get a different formula: three frets up, two strings up.

Before continuing, find every possible C note on the fretboard using these octave patterns. Repeat for D, E, F, G, A, and B. You don’t need all the notes memorized yet, just make sure you can use the patterns without referring to diagrams.

Here’s where things get a little harder. Review the notes on the sixth and fifth strings; those are essential before moving on. The fourth string is far less common for building chords, so this might be unfamiliar territory.

The process from here on will likely involve menial memorization, but it’s worth the effort. Get out some flash card materials and get ready to rock. You’ll only need seven for now. Write down the notes we’ve been dealing with, one on each card: C D E F G A B.

From Day 1 and Day 3, you already know the open string is D, 2nd fret is E, 3rd fret is F. And you know the octave D is at the 12th fret. Throw those flash cards out, and you have G, A, B, and C. Memorize those four, then add the other cards and test your knowledge of every note on the fourth string.

Any time you get stuck, return to yesterday’s octave patterns and relate the note you’re looking for to an octave below on the sixth string.

Repeat Day 7 on the third string!

Also think an octave below on the fifth and sixth strings.

Repeat Day 8 on the second string!

Think an octave below on the fourth and fifth strings.

To review everything at once, make six more flash cards, one for each string. Pull a note and a string and rattle off those fret numbers. Eventually you’ll know every note without hesitation. To get any note with a sharp or flat, just relate it to the unaltered notes you know: sharp is a half step higher, flat is a half step lower.

To expand your knowledge beyond the 12th fret, visualize a repeat of the first few frets. All the notes and shapes are the same, only an octave higher and 12 frets up the neck.

On top of this memorization method, keep the note relationships in mind. Be aware of every instance of a note on the fretboard. Use the tools above and apply them in your head to your daily playing. The next steps are bigger and better!

See a French translation of this article.